The total for last week's deportation sweep was more than 600, affecting a least 11 states. Immigration officials claim that the arrests were "routine," but President Trump’s recent tweet gives a different picture. "The crackdown on illegal criminals is merely the keeping of my campaign promise,” he writes. “Gang members, drug dealers & others are being removed!” Meanwhile, analysis of Trump's January 25 executive order on deportation shows that his "illegal criminals" and "bad hombres" could include as many as 8 million undocumented immigrants, more than three quarters of the unauthorized population.--TPOI editor. 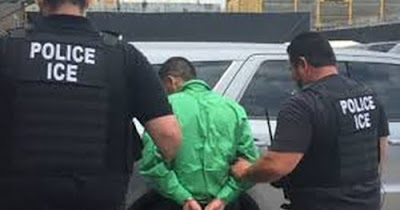 Immigration Agents Arrest 600 People Across U.S. in One Week

It remained unclear whether the actions by Immigration and Customs Enforcement agents were part of continuing operations to round up illegal immigrants with criminal convictions or a ramping-up of deportations by the Trump administration.[...]

The Future of Deportations Under Trump

The administration's new policies expand who is eligible for deportation, and an Arizona mother who has lived in the country for 21 years may be its first example.

The deportation of Guadalupe García de Rayos in Phoenix, Arizona, may be giving the undocumented population in the U.S. its first sense of what the next four years will feel like. Rayos is a 35-year-old mother of two who has lived in the U.S. for 21 years. In 2008, local deputies caught her using a fake social security number after they raided her work, and since then she has been required by Immigration and Customs Enforcement (ICE) to show up at regular interviews. Every year she’s talked to an agent, then been released back to her family in the U.S. But Wednesday Rayos was arrested, and on Thursday agents put her in a van to be deported back to Mexico.

In January, President Trump signed an executive order that vastly expands who the U.S. considers a deportation priority. The order received little immediate media attention at the time of signing, likely because of the many other controversial orders the president released simultaneously. The order is full of vague language, and interpreting it has left a lot of questions as to what’s in store for the country’s 11 million undocumented immigrants. [...]

Read the full article:
https://www.theatlantic.com/news/archive/2017/02/deportations-under-trump-rayos/516375/
Posted by The Politics of Immigration: Questions & Answers at 11:27 AM