Delve into tough questions about immigration with the authors of The Politics of Immigration.

Wednesday, October 10, 9:30 am-10:45 am and 11:00 am-12:15 pm, at I-115, Islip Arts Building, Suffolk County Community College, Ammerman Campus, 533 College Rd, Selden, NY 11784. Free and open to the public. Sponsored by Office of Campus Activities, Student Leadership Development, and Foreign Languages and ESL. For information, call 631-451-4117 or the Center for Social Justice and Human Understanding, Facebook.com/CSJHU.

Immigration history with Columbia University professor Mae Ngai, a national authority on the subject,. The three-part series is an exploration into our immigration laws and how they have been applied over the years, the role immigration has played in our country, and the reality of immigration today.

November 2: Immigrant Rights: Dialogue in a Time of Crisis
Bring your questions and thoughts about immigration to this participatory workshop facilitated by Jane Guskin and David Wilson, authors of The Politics of Immigration: Questions and Answers.  Together we will strengthen our skills to engage more effectively in productive dialogue.

“Getting at the Roots,” with Jane Guskin and David Wilson, authors of The Politics of Immigration. The three-part series is an exploration into our immigration laws and how they have been applied over the years, the role immigration has played in our country, and the reality of immigration today.

November 15: Deep Dive Into Immigration, Part 3
“The Money Question," with Jane Guskin and David Wilson, authors of The Politics of Immigration. The three-part series is an exploration into our immigration laws and how they have been applied over the years, the role immigration has played in our country, and the reality of immigration today.


For more on immigration dialogues:
https://thepoliticsofimmigration.org/our-immigration-dialogues/
Posted by The Politics of Immigration: Questions & Answers at 12:44 PM No comments:

Email ThisBlogThis!Share to TwitterShare to FacebookShare to Pinterest
Labels: dialogues 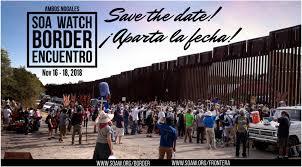 Time is flying and in less than 2 months we will converge at the US/Mexico border in ambos Nogales for our 3rd SOA Watch Border Encuentro this November 16-18: Dismantle Border Imperialism! Struggle, Create, Power to the People!

As we continue planning for this year's 3rd Encuentro, we want to share important updates with you, including our promotional video created by Olmeca, the weekend schedule of events and ways to support our largest annual gathering. We are excited to share our demands for this year, and invite you to join us in generating the biggest possible impact alongside other coalition groups and allies by endorsing this year's Encuentro.

The New Sanctuary Coalition is resolved to choose the side of liberty and equality. We are resolved to sacrifice in solidarity with those leaders of liberty and pioneers of equality who are nonviolently asserting their right to migrate by moving their caravan of brave souls across the U.S./Mexican border. We are resolved to form a U.S. Caravan of supporters who will meet the Central American Caravan in Mexico, witness their movement, and accompany them into the U.S. At the border, we will assist those seeking entry with their demands to enter the US without losing their liberty.[…]

"Resistance at Tule Lake" is Now Available on DVD & iTunes! 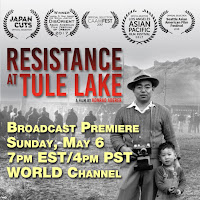 The documentary on resistance to the wartime incarceration of Japanese Americans has screened in
over 20 cities across the country since its premiere at CAAMFest 2017. The maker are still getting requests for more ways people can see Resistan.ce at Tule Lake.

The film is now available on DVD and iTunes! Demand for the film has been so high on the Netflix queue that they also jumped on board and are now offering the film for disc rental.

Workers in the berry fields of the United States and Mexico have the same transnational employers. Now, farmworker unions in those two nations have begun to work together.

By David Bacon, The American Prospect
October 31, 2018
Surrounded by blueberry and alfalfa fields near Sumas, Washington, just a few miles from the Canadian border, a group of workers last week stood in a circle behind a trailer, itemizing a long list of complaints about the grower they work for. Lorenzo Sanchez, the oldest, pointed to the trailer his family rents for $800 a month. On one side, the wooden steps and porch have rotted through. “The toilet backs up,” he said. “Water leaks in when it rains. The stove doesn't work.”[…]

Anyone who has followed the history of US involvement in Latin America and the Caribbean knows that the current crises in the region are absolutely “our problem.”

By David L. Wilson, Truthout
November 10, 2018
Most people are capable of holding two or more conflicting ideas on any given issue. Immigration is no exception.

A large segment of the US public was horrified in May and June when they saw the Trump administration snatching toddlers away from Central American mothers who arrived at the US border seeking asylum. Many would still be appalled if they knew that the White House is seeking to continue the practice in a different form. Most undoubtedly feel genuine sympathy for young people trying to escape violent gangs or abusive partners. Still, a lot of these same sympathetic Americans don’t actually want the asylum seekers to come here.[...]


Posted by The Politics of Immigration: Questions & Answers at 3:30 PM No comments: