Open Forum: The Politics of Immigration, Questions and Answers 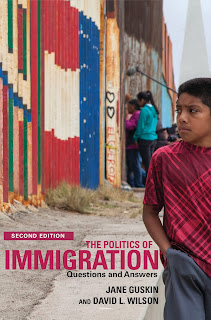 Join authors Jane Guskin & David L. Wilson for a participatory discussion of themes from their book, The Politics of Immigration.

In The Politics of Immigration: Questions and Answers, Guskin and Wilson explore the intersection of migration, race, labor, politics and social change. The authors will share insights and selections from the book while engaging the audience in an interactive exchange of ideas. Bring your questions and an open mind.

Organized by:
New York City Department of Records and Information Services/Municipal Archives
Free and open to the public, but RSVP here:
https://www.eventbrite.com/e/open-forum-the-politics-of-immigration-tickets-71526179729

For more on immigration dialogues:
https://thepoliticsofimmigration.org/our-immigration-dialogues/
Posted by The Politics of Immigration: Questions & Answers at 9:18 AM No comments:

Email ThisBlogThis!Share to TwitterShare to FacebookShare to Pinterest
Labels: dialogues

[This article is a useful answer to people who cite asylum denial rates to claim asylum seekers are all economic immigrants, that they're coached, etc. WNYC’s Beth Fertig  shows how the system’s stacked against migrants, even the ones lucky enough to have legal representation.—TPOI editor]

By Beth Fertig, WNYC
September 26, 2019
Seventeen year-old Josue and his mom, Esperanza, were visibly drained. They had just spent more than four hours at their asylum trial inside an immigration court at 26 Federal Plaza in Lower Manhattan, answering questions from their attorney and a government lawyer. We are withholding their full names to protect their identities because they’re afraid.

“It was exhausting,” said Josue, whose angular haircut was neatly combed for the occasion. In Spanish, he told us the judge seemed nice but, “you feel bad if you don’t know if you are going to be allowed to stay or if you have to go.”[…]

Posted by The Politics of Immigration: Questions & Answers at 4:17 PM No comments:

Email ThisBlogThis!Share to TwitterShare to FacebookShare to Pinterest
Labels: refugees

They Say They Support “Legal Immigration.” They Don’t.

The evening of September 7 protesters from Rise and Resist dropped a banner at a Mets game reading: “Immigrants Make Baseball Great.” When they tweeted out a video of the action, the usual suspects responded with tweets about “legal immigrants.”

This is a standard response from the right wing. The irony is that for the past two and a half years the Trump administration’s focus has been on cutting legal immigration. The travel ban was about excluding legal immigrants who were Muslim. The measures against asylum seekers target people exercising their legal right to apply for asylum (which they have even if they “entered without inspection”). The “sh--hole countries” remark was about legal immigrants from African countries. So it’s blatantly dishonest for the right to bring up legality when the goal is really just to exclude certain people.

We need to keep exposing this hypocrisy every time we encounter it.

But is this really worth the effort? Many people simply use the term “illegal” as a code word to disguise their racism; they give themselves away when they say someone “looks illegal.” But some are actually confused and think they are upholding an idea of the United States as a “nation of laws,” and it’s important to keep the issue clear: the right wing’s agenda is limiting all immigration—legal or otherwise—by poor people of color.

Note: John Oliver has provided an informative guide to the Byzantine process for getting legal immigration status.
Posted by The Politics of Immigration: Questions & Answers at 3:57 PM No comments: