[This article from the Economic Policy Institute makes a crucial point that’s often missing from discussions of immigration: U.S. workers aren’t harmed by the presence of undocumented workers and guest workers; the problem is the super-exploitation of foreign-born workers, and the solution is ending the policies that enable this super-exploitation.—TPOI editor]

By Daniel Costa, Economic Policy Institute
August 27, 2019
In recent decades, far too much of our immigration policy apparatus has ignored the interests of workers—immigrants and U.S.-born workers alike. This apparatus has instead been weaponized to suppress wages for employers’ gain. Immigration is an area of policy where a few simple solutions could result in major improvements to labor standards for all workers—but these solutions are blocked by low-road employers who benefit from today’s anti-worker system.

To be clear, the challenge posed to U.S. workers is not the simple presence of migrant workers in the labor market; instead, it is the legal framework that makes these workers exploitable.[…] 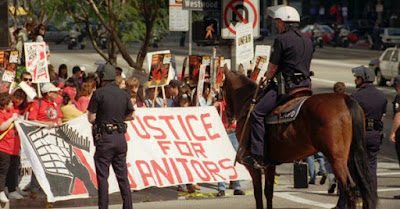 Posted by The Politics of Immigration: Questions & Answers at 3:47 PM No comments:

[Our friend Ursula Levelt died of cancer on July 7. In addition to her work for labor rights, Ursula was a powerful advocate for immigrants—here in the United States and in her native Netherlands. Below is a tribute from Transit Workers Union Local 100, where she was legal director, along with a link to an article Ursula wrote for openDemocracy in 2014.—TPOI editor]

TWU Local 100 sadly reports the passing of long-time in-house attorney and labor activist, Ursula Levelt.  She died on July 7, 2019 of cancer in her beloved Amsterdam, the Netherlands.  She had moved back there recently to spend her final days in the place of her birth.  She was 60 years old. Her husband, Bill, informed the union of her death, saying: “Ursula was dedicated to the labor movement and to TWU Local 100.  She remembered the many friends and comrades there that she had worked with and fought for over the many years.”[…]

Can “the people” truly set the agenda?

By Ursula Levelt, openDemocracy
May 21, 2014
Although the human rights movement has long been a project of elites, many are working to change this story. Earlier on openGlobalRights, James Ron and colleagues argued that to combat the movement’s elitist slant, human rights organizations should foster grassroots movements worldwide, and human rights in general should be more mass-based. In contrast, Felipe Cordero noted that human rights groups need the support of powerful people and should work with elites as much as possible. Amnesty International’s Steve Crawshaw argued we should not falsely polarize elites and the masses; both are needed, and are mutually dependent.[…]

Read the full article:
https://www.opendemocracy.net/en/openglobalrights-openpage/can-people-truly-set-agenda/
Posted by The Politics of Immigration: Questions & Answers at 3:39 PM No comments:

The US Has “Disappeared” More Than 42,000 Migrants. Where’s the Outrage?

Trump’s most insidious immigration program is operating under the radar

By David L. Wilson, Truthout
September 14, 2019
The most successful of Trump’s anti-immigrant measures up until now — and possibly the most vicious — hasn’t been getting the attention it deserves.

In operation since late January, Migrant Protection Protocols (MPP), originally called “Remain in Mexico,” allows the U.S. government to push most non-Mexican asylum seekers into Mexico once immigration officials have cleared them to make an asylum claim. As of early September, the number of people forced into Mexico under MPP had reportedly risen to more than 42,000.[…]

Read the full article:
https://truthout.org/articles/the-us-has-disappeared-more-than-42000-migrants-wheres-the-outrage/
Posted by The Politics of Immigration: Questions & Answers at 11:11 AM No comments: