Farm workers in upstate New York constantly face hurdles in their efforts to organize. As reported in an important article from Documented, the workers, who tend to be immigrants, are currently suing to have the state include them in labor protections afforded other workers. But if some industry groups have their way, these farm employees will eventually be replaced by guest workers. Much of the state’s farming is in dairy, and there’s a lot of pressure to have the H-2A program extended so that dairy farmers can take advantage of it. David Bacon’s recent article in The American Prospect describes some of the abuses H-2A guest workers are subjected to, in this case by farm owners in Washington state.

New York’s diary farmers and others are in fact suffering economically, but it’s not because their workers are getting paid too much or have an excess of labor rights. The causes, according to the New York Times, are global warming, Trump’s tariffs, and a shortage of immigrant workers intimidated by the threat of ICE raids.—TPOI editor

What he does want to talk about is the potentially groundbreaking court case that has dominated his life for the past two years. Hernandez is fighting the New York Farm Bureau, which represents agricultural interests, to win the right for farmworkers to organize for collective bargaining without retaliation. State Supreme Court Judge Richard J. McNally, Jr. dismissed his case at the state Supreme Court in Albany in January, but the New York Civil Liberties Union, which represents Hernandez, has appealed the judgment.[…]

What Was the Life of This Guest Worker Worth?
While Washington state agencies reduce farmworker pay and find employers faultless for a death in the fields, Trump and congressional Republicans back proposals to turn farmworking into permanent indentured servitude.

On Sunday, August 5, a group of 200 farmworkers and supporters began walking at sunrise along the shoulder of Benson Road, heading north from Lynden, Washington, toward Canada. When they reached O Road, the marchers turned right to walk along the border. Unlike the frontier with Mexico, with its walls, floodlights, and patrols, the border line here is no line at all—simply a road on each side of a weed-choked median.

The procession, chanting and holding banners, passed a succession of blueberry fields for the next 14 miles, finally reaching the official border crossing at Sumas. Pausing for a protest in front of the local immigrant detention center, it then continued on until it reached its objective one mile further on—the 1,500-acre spread of Sarbanand Farms. There, in front of the ranch’s packing and warehouse facilities, participants staged a tribunal.[…]

Posted by The Politics of Immigration: Questions & Answers at 6:22 PM No comments:

How to Organize Against ICE Raids, and Why We Need to Do It

As the Trump administration cracks down on undocumented immigrants, it’s urgent for worker centers and unions to organize to defend immigrant members.

In Western Massachusetts, the Pioneer Valley Workers Center has created a rapid-response network it calls “Sanctuary in the Streets” (SiS). The worker center, founded in 2014, organizes restaurant workers and farmworkers in the area. Worker committees set the network's priorities.[…]

A small town in Nebraska was rocked last week when Immigration and Customs Enforcement (ICE) and Homeland Security Investigations (HSI) agents raided multiple businesses, arresting 133 undocumented immigrant workers in an operation which has already created upheaval in the community and its local agriculture industry.

This raid is the latest amid a series of enforcement operations conducted by the Trump administration, including raids in Tennessee and Ohio. In addition to the workers, 17 employers were served arrest warrants last week for allegedly exploiting undocumented labor, among other crimes.[...]

Posted by The Politics of Immigration: Questions & Answers at 12:05 AM No comments: 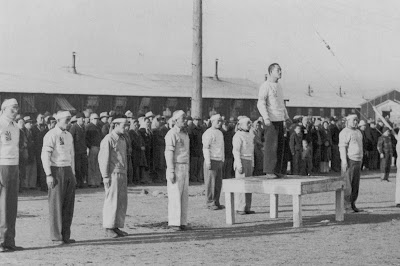 From Resistance at Tule Lake

Our film is now live on the Third World Newsreel catalogue for educational distribution - on DVD and via streaming!

Buy or Rent Now for the Upcoming Semester!

The real history of Japanese American incarceration is minimized in most school curricula. As a result, the general American public does not know nearly enough about these experiences, and most have never heard of Tule Lake.

Why is it important for young people to learn about this shameful chapter of American history, and how thousands of Japanese Americans risked everything to stand up for their civil rights?

"Those who do not learn history are doomed to repeat it."

Today, we are seeing similar government-sponsored abuse of immigrant communities, as well as the same tactics that were used to soften the reality of the experience. Breaking this cycle has been foremost in the conversations this film has sparked across the country, and our educational distribution is an opportunity to inspire the next generation.

Bringing Resistance at Tule Lake to classrooms across the country will empower students and educators to fully engage with this urgent, hidden history. This meticulously crafted and researched documentary is driven by powerful first-hand accounts, illuminated by expert commentary. It is accompanied by a comprehensive curriculum guide that invites students to delve deeply into this history, and draw connections to current issues faced by immigrants, refugees and communities of color.

Our hope is that instead of asking "what is Tule Lake?" more people will ask "what can we learn from Tule Lake?"

Click here to include the film in your curriculum

Posted by The Politics of Immigration: Questions & Answers at 5:35 PM No comments:

William Perdue of Arnold & Porter deftly argued before a packed courthouse that Ravi and the New Sanctuary Coalition should receive a stay of deportation. Perdue stated that there is strong evidence that the government retaliated against Ravi because he has been outspoken about the injustices of our current immigration system and he, the New Sanctuary Coalition, and the community have exposed ICE’s cruel and unjust practices.[...]

Posted by The Politics of Immigration: Questions & Answers at 5:19 PM No comments: