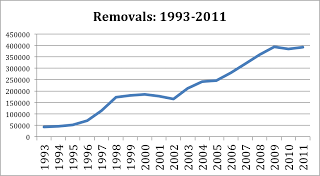 These numbers are unprecedented: by 2014 President Obama will have deported over 2 million people - more in six years than all people deported before 1997. [...]

Within hours of an immigration raid on her family’s home last night, the mother and brother of undocumented immigrant activist Erika Andiola’s family were released from immigration detention this morning. Immigration and Customs Enforcement has indicated that it will likely exercise prosecutorial discretion in their cases, the Huffington Post reported. The swift response came even though Andiola’s mother Maria Arreola and brother Heriberto Andiola Arreola are undocumented, and faced likely deportation.

The flurry of public outrage and social media attention around the case—see the steady stream of tweets on the hashtag #WeAreAndiola—has highlighted two things: the power of the immigrant youth movement and the striking regularity and cruelty with which immigration agents break up everyday families in the country. [...]

Posted by The Politics of Immigration: Questions & Answers at 10:50 AM No comments:

And a larger number of individuals are detained each year in the immigration detention system (just under 430,000 in fiscal 2011) than are serving sentences in federal Bureau of Prisons facilities for all other federal crimes.

“Today, immigration enforcement can be seen as the federal government’s highest criminal law enforcement priority, judged on the basis of budget allocations, enforcement actions and case volumes,” said MPI Senior Fellow Doris Meissner, who co-authored the report, Immigration Enforcement in the United States: The Rise of a Formidable Machinery. [...]

A briefer version is also available:
http://www.migrationpolicy.org/pubs/pillars-reportinbrief.pdf
Posted by The Politics of Immigration: Questions & Answers at 10:47 AM No comments:

Editor's Note: Lorena Hernandez is a young farm worker and single mother from Oaxaca, Mexico. Today she lives in Madera, Calif., with her daughter and aunt. She told her story to David Bacon.

MADERA, Calif.--To go pick blueberries I have to get up at four in the morning. First I make my lunch to take with me, and then I get dressed for work. For lunch I eat whatever there is in the house, mostly bean tacos. Then the ritero, the person who gives me a ride to work, picks me up at 20 minutes to five.

Making a Life, but Not a Living in the Fields: Lucrecia Camacho's Story
By David Bacon, Truthout
January 3, 2013

Lucrecia Camacho comes from Oaxaca, and speaks Mixtec, one of the indigenous languages and cultures of Mexico that was hundreds of years old before the arrival of the Spaniards. Today she lives in Oxnard, California. Because of her age and poor health, she no longer toils as a farmworker, but she spent much of her life in Oxnard's strawberry fields, and before that, in the cotton fields of northern Mexico. She told her story to David Bacon.

I was born in a little town called San Francisco Higos, Oaxaca. I've worked all of my life. I started to work in Baja California when I was a little girl. I've worked in the fields all of my life, because I don't know how to read or write. I never had an opportunity to go to school. I didn't even know what my own name was until I needed my birth certificate for the immigration amnesty paperwork after I'd come to the US.

When I was seven, my mother, stepfather and I hitchhiked from Oaxaca to Mexicali, and I lived there for two years. I spent my childhood in Mexicali during the bracero years. I would see the braceros (Mexican guest workers) pass through on their way to Calexico, on the US side. I would beg in the streets of Calexico and they would throw me bread and canned beans on their way back home. I also begged in Tijuana. I'm not ashamed to share that because that is how I grew up. [...]

Read the full article:
http://truth-out.org/news/item/13696-making-a-life-but-not-a-living-in-the-fields-lucrecia-camachos-story
Posted by The Politics of Immigration: Questions & Answers at 10:46 AM No comments:

What Are 'Peacekeepers' Doing in a Haitian Industrial Park?

The big industrial park near the international airport north of Port-au-Prince actually does look like a nature park. Thousands of Haitians may be inside the complex’s 47 buildings hurriedly stitching tens of thousands of T-shirts for the North American market, but the wide, tree-lined streets between the factory seem peaceful when you drive along them in mid-morning on a workday. It’s as if you were in a gated community in the United States, a thousand miles from the noisy chaos of the Haitian capital.

As in many gated communities, there’s a security force at the Metropolitan Industrial Park, which is identified in Haiti as SONAPI, the acronym for Société Nationale des Parcs Industriels, the semi-governmental agency that runs the park. Haitian guards check you out before they allow you to enter, and once inside you find the grounds patrolled by a white car with a big “UN” painted in black on the side. [...]


Posted by The Politics of Immigration: Questions & Answers at 10:41 PM No comments:

Immigration Reform for My Mom

When nationally syndicated CNN columnist Ruben Navarrette declared last month that DREAMers (you know, the kids who brought us Deferred Action last year) “deserve a scolding,” people responded strongly to Navarrette’s analysis of the DREAMers as a group of “entitled” brats who were risking the movement for everyone else (including their parents). For many people, DREAMers are viewed as heroes, aligned with Martin Luther King and others as the potential vanguard of the civil rights revolution for Latinos. And I think these folks are right. DREAMers absolutely do need to be congratulated, placed in leadership roles, and listened to.

But the fact of the matter is, the battles they’ve won so far aren’t enough. Any version of DREAM Act, any amount of Deferred Action approvals, any number of Provisional Stateside Waivers granted – will still leave out thousands. Thousands of sisters, grandmothers, uncles, and brothers who won’t qualify for these piecemeal protections. My mother is among those. [...]

Read the full article:
http://neverneutral.net/2013/01/10/immigration-reform-for-my-mom/
Posted by The Politics of Immigration: Questions & Answers at 11:24 PM No comments:

The small workers’ center in Port-au-Prince’s Delmas district was hot and the electricity had gone out, but about three dozen workers from the city’s apparel plants were willing to sit in the dark and the heat for nearly two hours after work one evening in early October to tell a group of U.S. activists about the struggle for better wages in Haiti.

“We have to pay for our transportation,” said “Jean” (not his real name), an employee at the Multiwear Assembly plant in the big industrial park near the airport. “We can’t do anything with our salary. We start work at 6 a.m. and finish at 5 p.m. The quota is huge. We don’t even have time to eat because we can’t meet the quota.”

Protests had broken out at the end of September and the beginning of October, the workers said, after factory owners stepped up production quotas to circumvent an increase in the minimum wage that went into effect on October 1. [...]

Posted by The Politics of Immigration: Questions & Answers at 12:07 AM No comments:

Haiti Three Years After the Earthquake: A Labor Perspective

When: Saturday, January 12, 2013, 6 pm
Where: CWA Local 1180, 6 Harrison Street, basement, Manhattan (between Hudson Street and Greenwich Street, 1 to Franklin St or A, C, E, 2 or 3 to Chambers St)
What: Forum on Haiti three years after the earthquake

New York, Jan. 10—Three New York-based activist journalists are marking the third anniversary of Haiti's 2010 earthquake this Saturday with a report-back on their visits to the country last October. The forum, held at a union hall in Lower Manhattan, will focus on grassroots organizing by Haitians, especially in the garment assembly plants.

The anniversary has brought a run of articles in the media here. While the coverage notes the failure of international aid to help Haiti “build back better,” it also claims there has been “some progress,” in the words of a New York Times editorial. The paper’s example is “a new industrial park north of Port-au-Prince, the capital, providing the first 1,300 of what are supposed to be many thousands of manufacturing jobs.”

The three New Yorkers got a very different perspective in talks with Haitian assembly workers, who are currently struggling just to be paid the new legal minimum wage of $7 a day. They are looking for grassroots solidarity from the United States, they said--not projects like the new industrial park, built largely with $124 million in U.S. tax money170 miles from the earthquake zone, and mostly benefiting multinationals like Walmart..

The forum will include a photo projection from photojournalist Tony Savino and talks by David Wilson and Marty Goodman. Savino, who visited the northern city of Ouanaminthe in October, has photographed Haiti regularly for a quarter century; a sample of his work can be found at http://www.tonysavino.com/. Wilson was in Port-au-Prince when the earthquake struck, and has written about that experience and about the economics of the assembly sector. Goodman, a retired transit worker and former member of the TWU Local 100 Executive Board, began covering Haiti in 1986 with reports on the overthrow of Jean-Claude Duvalier (“Baby Doc”); an article on his most recent trip appeared in the November Socialist Action.