Unauthorized immigration across the U.S.-Mexico border is now the lowest it’s been in the past 25 years, Center for Migration Studies (CMS) demographer Robert Ewing wrote in February, citing reports from the CMS and the Pew Research Center. The current undocumented population is estimated at 10.7 million, down more than a million since 2010.

We might expect this finding to appear in a few headlines, especially at a time when President Trump has declared a national emergency on the basis of a supposed security crisis at the southwestern border. Instead, the U.S. media went with headlines like “February had highest total of undocumented immigrants crossing U.S. border in 12 years.” Some of the articles did note that even with the one-month increase, border apprehensions remain dramatically lower than they were in 2000, but this was unlikely to offset the effect of the headlines.

And few noted a point made by University of Illinois at Chicago Latin American and Latino Studies professor Adam Goodman in a twitter thread: many of the undocumented immigrants were asylum seekers that government agents turned away at ports of entry, “forcing them to (a) wait in precarious conditions and in violation of domestic and international law, or (b) or cross the border without authorization.”

“By inflating apprehension statistics,” Goodman goes on, “officials simultaneously (a) create the notion of a surge or invasion at the border, (b) call attention to the need for additional funding, and (c) celebrate DHS's ‘accomplishments.’” The administration then releases the “inflated statistics with hope that mainstream media outlets will pick them up, in turn reinforcing [the administration’s] desired political narrative.” If the media take the bait, the government sends out “inflammatory email blasts citing media reports of the inflated statistics [it] circulated as evidence of a CRISIS AT THE BORDER that constitutes a national emergency.”

Unfortunately, there’s an ongoing problem with the corporate media allowing the White House to create hysteria about asylum seekers at the border—despite Trump’s routine assistance that the “fake news” media are mistreating him. In reality, Trump owes a lot to the media outlets: all the way through the 2016 they failed to push back on repeated claims by all the GOP candidates about a wave of unauthorized immigration that had actually ended in 2008.

Meanwhile, Trump shows no sign of toning down his anti-immigrant hate speech even after an Australian white supremacist murdered 49 worshippers at two New Zealand mosques. The killer had justified the massacre as a way “to show the invaders that our lands will never be their lands.” At the White House the next day the U.S. president echoed this rhetoric: “People hate the word ‘invasion,’ but that’s what it is,” he said, referring to unauthorized migrants crossing the southwest border.

Posted by The Politics of Immigration: Questions & Answers at 4:20 PM No comments:

Students, the Sixties, and How to ‘Fail Better’ 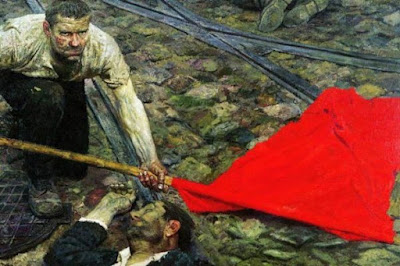 In pop culture versions of 1960s activism, student radicals are often depicted as spoiled upper-class kids rebelling against their privileged parents, engaging in random acts of violence, and despising the nation’s wage-earning majority. In reality, the 100,000 or so youths in the student movement were largely drawn from the lower middle class, and some from the working class; their parents were frequently in general agreement with their children’s politics; the period’s radical activism was much more about leafleting, petitioning, and tabling than about confrontations with the police; and far from rejecting the country’s workers, a significant part of the movement considered finding ways to approach this class a central political issue.

You Say You Want a Revolution: SDS, PL, and Adventures in Building a Worker-Student Alliance is a useful introduction to the actual experience of many or most of the student activists a half-century ago.[…]

Read the full article:
https://mronline.org/2019/03/13/students-the-sixties-and-how-to-fail-better/
Posted by The Politics of Immigration: Questions & Answers at 10:35 AM No comments: