Resistance Works, Despite the Flaws

There are a lot of problems with the resistance to Trump’s immigration crackdown: lack of coordination in the grassroots movement, faltering commitment from native-born allies, inadequate sanctuary measures in self-proclaimed “sanctuary cities.” Still, resistance measures are having an effect, according to a new report from the Migration Policy Institute.—TPOI editor

ICE Arrests Under Trump Are Up Significantly Over Latter Obama Years, But Pushback from California & Other ‘Sanctuaries’ Make Return to Record Peaks Unlikely 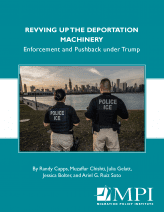 Migration Policy Institute Press Release
May 8, 2018
WASHINGTON – The Trump administration has significantly revved up the immigration enforcement machinery in the U.S. interior, with arrests and deportations up about 40 percent in its first eight months over a year earlier. Yet pushback from California and cities such as Chicago, New York, Boston and Seattle makes it quite unlikely that U.S. Immigration and Customs Enforcement (ICE) will be able to match its record enforcement levels, the Migration Policy Institute (MPI) finds in a new report.

ICE arrests and removals during fiscal 2017 were about half their peaks during the early Obama years, before that administration significantly narrowed its enforcement priorities, effectively shielding all but a fraction of the nation’s estimated 11 million unauthorized immigrants from deportation.[…]

While the media obsessed with analyzing what Trump means by “animals,” two important stories were being overlooked. On May 15 a U.S. district judge appointed by George W. Bush ruled that ICE had behaved in an “arbitrary and capricious” manner and without any “rational explanation for its decision” in its efforts to deport DACA recipient Daniel Ramírez Medina. And on May 17 Attorney General Jeff Sessions threw out years of immigration court practice, denying immigration judges the ability to give immigrants a break by putting their cases on hold.—TPOI editor

Bad Liars
ICE claimed a Dreamer was “gang-affiliated” and tried to deport him. A federal judge ruled that ICE was lying.

By Mark Joseph Stern, Slate
May 16, 2018
On Tuesday, U.S. District Judge Ricardo S. Martinez shot down the federal government’s efforts to strip Daniel Ramirez Medina of his DACA status. Immigrations and Customs Enforcement had arrested and detained Ramirez last year, then falsely claimed that he was affiliated with a gang and attempted to deport him. He filed suit, alleging that ICE had violated his due process rights. Martinez agreed. His order barred the federal government from voiding Ramirez’s DACA status, safeguarding his ability to live and work in the United States legally for the foreseeable future. What may be most remarkable about Martinez’s decision, though, is its blunt repudiation of ICE’s main claim—that Ramirez is “gang-affiliated.” The judge did not simply rule against ICE. He accused the agency of lying to a court of law.[…]

By Katie Benner, New York Times
May 17, 2018
Attorney General Jeff Sessions issued a directive on Thursday that places limits on a tool commonly used by immigration judges and could put hundreds of thousands of deportation cases that are essentially closed back on federal court dockets.

The move, issued in an interim decision, is unlikely to reopen all the cases. But Mr. Sessions said that immigration courts could not put such cases on indefinite hold by using a practice known as administrative closure, which temporarily removes a case from a judge’s calendar and delays a proceeding that could remove an immigrant from the country.[…]

[An important piece on an underreported topic: the power Jeff Sessions has to make the immigration court system even worse than it is. And there's a real danger that he’ll use this power.—TPOI editor]

The attorney general is poised to issue decisions that could determine the fate of tens of thousands of immigrants.

May 14, 2018
The fate of tens of thousands of immigrants’ court cases could rest in the hands of Attorney General Jeff Sessions.

That’s not a metaphor. Sessions has stepped into the immigration system in an unprecedented manner: giving himself and his office the ability to review, and rewrite, cases that could set precedents for a large share of the hundreds of thousands of immigrants with pending immigration court cases, not to mention all those who are arrested and put into the deportation process in future.

He’s doing this by taking cases from the Board of Immigration Appeals — the Justice Department agency that serves as a quasi-appellate body for immigration court cases — and referring them to himself to issue a decision instead.[…]

Read the full article:
https://www.vox.com/policy-and-politics/2018/5/14/17311314/immigration-jeff-sessions-court-judge-ruling
Posted by The Politics of Immigration: Questions & Answers at 12:14 PM No comments:

Tomorrow, May 11th at 10 AM, the New Sanctuary Coalition invites you to a People's Press Conference, during which statements & testimonials will be read by people & their families who have been impacted by detention and deportation. At Foley Square in Lower Manhattan. 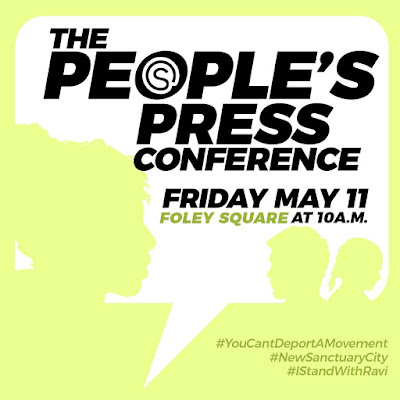 An Update from Ravi's Legal Team

On Friday, May 4th, we had an evidentiary hearing about whether there were fundamental errors during Ravi's old criminal case, which led to his deportation order.

As his legal team, we know that Ravi and the New Sanctuary Coalition fight every day to preserve due process and access to courts for noncitizens fighting deportation. In that regard, the hearing itself was a victory. It was the first time - in over a decade - where Ravi has been able to tell his story to a judge. We are grateful for that opportunity, and hopeful that justice will be done.

It was a long day of testimony and taking evidence, and our entire team is so grateful for all your support- from those who came out to Newark for this hearing or for past hearings, to those who joined in last week's Jericho Walks, and to all those who sent their positivity our way. Your presence and love has been so meaningful.

The judge did not issue a decision on Friday, and allowed both sides to submit post-hearing briefing. We do not expect a decision until after final briefs are due on June 22nd. Ravi's stay of removal extends at least until a decision is issued.

His check-in with ICE originally scheduled for tomorrow has been postponed to July 27th. To all those who were planning to come out tomorrow to accompany him, we encourage you to attend the People's Press Conference instead (details above).

In solidarity,
Ravi's Legal Team
Posted by The Politics of Immigration: Questions & Answers at 7:06 PM No comments:

We are so happy to announce that our national broadcast premiere is coming up this Sunday on the WORLD channel!

The opportunity to have this hidden history come to life in living rooms across the country is a large step forward in expanding the narrative of the incarceration experience during WWII for thousands of Japanese Americans - our neighbors, our friends, our very own family. We are getting the full version of Resistance at Tule Lake ready for a DVD release in Summer/Fall 2018! We have screenings scheduled in Los Angeles and Sacramento for the month of May, so keep a look out for more updates.

Posted by The Politics of Immigration: Questions & Answers at 10:22 AM No comments: