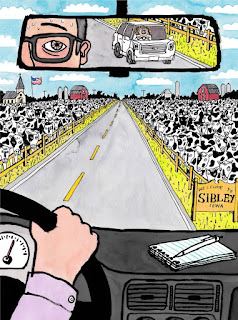 On September 30 Esquire posted a fascinating article by reporter Ryan Lizza about the Iowa farm
operated by the family of California Congress member Devin Nunes, a major Trump supporter. The family quietly moved most of its California dairy operations to this farm, located in the small town of Sibley, more than a decade ago. Lizza wondered why they had been so careful to avoid publicity about the move, so he went to Sibley to investigate.

His investigation quickly turned into something out of the old hardboiled detective genre, with sources suddenly clamming up and mysterious vehicles tailing Lizza as he drove around town. Eventually the mystery was solved: dairy farmers and others in the area seemed to be heavily dependent on undocumented labor to carry out their operations. Lizza was unable to establish anything about the Nunes family’s farm, but the presumption is that they too relied on unauthorized workers.

Rep. Nunes himself appears to be a moderate on immigration issues, but he’s been an important enabler of the Trump regime, which is committed to a ferocious anti-immigrant agenda. Sibley farmers seem to maintain a similar duality: they disagree with Trump and their Congress member, white supremacist Steve King, about immigration policy, yet they vote overwhelmingly for these men. “There is massive political hypocrisy at the center of this: Trump’s and King’s rural-farm supporters embrace anti-immigrant politicians while employing undocumented immigrants,” Lizza writes.

Lizza’s reporting is great, but his analysis isn’t especially deep. He notes that Iowa’s dairy farmers use undocumented labor to save money—“workers start at fourteen or fifteen dollars an hour, the first farmer said. If dairies had to use legal labor, they would likely have to raise that to eighteen or twenty dollars”—but he doesn’t explore how “illegality” forces these workers to accept lower wages. And he fails to ask who ultimately benefits from the exploitation of undocumented farm workers.

It’s actually not the farmers, Lizza notes: “many dairies wouldn’t survive” if they had to pay authorized workers. In other words, the farmers underpay their workforce because they are being squeezed by the large food processing and distribution corporations, which pocket the extra profits. So an obvious question would be whether these corporations or their CEOs make contributions to anti-immigrant politicians like Trump and King. Unfortunately, Lizza doesn’t raise this.

He also seems uninformed about guest worker programs. As Iowa’s farmers see it, the best option is bringing in H-2A workers; farmers can exploit these laborers just as easily as the current undocumented force but without the risk of fines or jail sentences for violating immigration law. However, dairy farming requires year-round employees, while the current H-2A programs only allow seasonal hiring. The farmers want to remove this limitation.

Lizza dismisses the idea as “a fantasy in the current environment; Trump, King, and their allies describe such policies as ‘amnesty.’” Apparently Lizza hasn’t been paying attention. It’s true that King opposes the H-2A expansion, but Trump’s all for it. “Guest workers, don’t we agree?” he ranted at an April rally. “We have to have them.”
Posted by The Politics of Immigration: Questions & Answers at 6:04 PM