Book Excerpt: Is Birthright Citizenship a “Magnet” for Unauthorized Immigration? 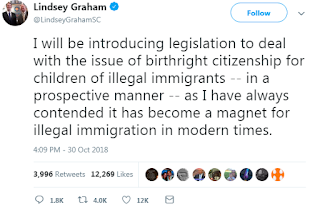 On October 30 Senator Lindsey Graham (R-SC) announced that he would introduce legislation to challenge birthright citizenship for the U.S.-born children of undocumented immigrants. “[I]t has become a magnet for illegal immigration in modern times,” the senator claimed. Many immigration opponents have asserted this, but they’re rarely challenged to provide proof.

We take a look at the available evidence in The Politics of Immigration: Questions and Answers, second edition, Chapter 4, “Why Can’t They Just ‘Get Legal’?”:

Children born in the United States are U.S. citizens, even if their parents are out-of-status immigrants. Opponents of immigration like to call such children “anchor babies,” implying that immigrant parents use their U.S.-born children as a way to establish themselves here. In July 2010 Senator Lindsey Graham (R-SC) claimed on Fox News that unauthorized women come to the United States simply to “drop and leave” their babies.

Most citizen children of undocumented immigrants are actually born some time after their parents have settled in the United States, according to a study of babies born to immigrants from March 2009 to March 2010. Just 9 percent of the out-of-status parents had arrived in 2008 or later; most had been in the United States for a number of years when the babies were born—30 percent had arrived between 2004 and 2007, and 61 percent arrived before 2004. For its October 2005 survey, Bendixen & Associates asked undocumented immigrants to give their reasons for migrating to the United States. The respondents overwhelmingly cited work opportunities; having “anchor babies” didn’t even rate a mention.

In any case, having a U.S. citizen child doesn’t help undocumented immigrants gain legal status, or even protect them from deportation. U.S. citizens have to be at least twenty-one years old to sponsor their parents for legal residency. Each year, thousands of people who have U.S.-born children are deported, leaving families shattered. A 2012 study by the New York University School of Law’s Immigrant Rights Clinic found that 87 percent of New York City immigration cases involving parents of U.S. citizen children between 2005 and 2010 ended in deportation….

If we ended birthright citizenship, what status would the U.S.-born children of undocumented immigrants have? Would they also be undocumented? In that case, ending birthright citizenship would increase the number of undocumented people in the country; the undocumented population would be at least 44 percent larger by 2050, according to a projection by the nonprofit Migration Policy Institute project. In other words, revoking the country’s long tradition of granting citizenship to everyone born here would expand and make permanent an underclass of vulnerable, easily exploited people without full rights—very much like the U.S. South under Jim Crow laws or South Africa under apartheid.

[We’re occasionally posting excerpts from the second edition of The Politics of Immigration: Questions and Answers. You can order here or from your favorite bookseller.]

Posted by The Politics of Immigration: Questions & Answers at 5:25 PM