Immigration issues seem set to get renewed public attention next month. Ten rightwing state governments are suing to end DACA (Deferred Action for Childhood Arrivals, the popular program that grants temporary protection from deportation to about 800,000 younger immigrants), and Trump is threatening a government shutdown if Congress doesn’t approve funding for his border wall. Meanwhile, there are reports that Trump’s new chief of staff, Gen. John Kelly, is planning to push Congress for a “grand bargain” immigration bill which would shield DACA recipients while stepping up detentions and deportations, funding some type of “wall” (mostly through still more border enforcement), requiring that all employers use E-Verify, and cutting legal immigration in line with the RAISE Act proposal that Trump was promoting earlier this month. 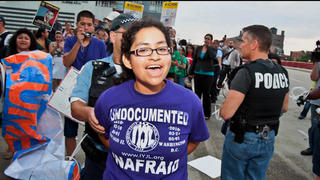 If true, this seems like a classic divide-and-conquer strategy, intended to set DACA recipients against supporters of broader rights for immigrants. The approach is unlikely to work with most immigrant activists, but there’s the danger that it might appeal to a number of centrist Democrats. What’s certain is that any “grand bargain” approach would probably bring immigration back into the center of public debate, and we can expect a barrage of false information about immigrants. Will immigrant rights supporters be prepared to fight the propaganda with real facts and analysis and to answer the Trump agenda with a program that’s both humane and realistic?—TPOI editor

Trump under the gun as Dreamers deadline looms
The president must decide whether to side with his conservative base or young undocumented immigrants.

President Donald Trump has been unusually cautious about his plans for so-called Dreamers, but he’s running out of time to make up his mind.

Ten conservative states have threatened to sue the administration in order to kill off the Deferred Action for Childhood Arrivals program, a 2012 initiative that has granted work permits to nearly 800,000 young undocumented immigrants. They’re trying to replicate their legal tactic from more than two years ago, when a broader coalition of GOP-led states successfully stopped a more expansive program for millions of undocumented immigrants before it even began.[…]

Shutdown threat grows as Trump digs in on wall
The fight over the border wall is likely to explode in September.

President Donald Trump’s vow Tuesday to close down the government if he doesn’t get money for the border wall mirrors private comments he has made to advisers in recent days — and could cause significant rifts within his own party if he follows through.

The fight over the wall is likely to explode in September as the administration wrangles over a new budget, an increase in the debt ceiling, the beginning of a tax reform package and a possible resuscitation of health care legislation.[…]

The Trump administration has been active in changing immigration policy through the executive branch, but it’s turning its sights toward Congress.

President Donald Trump himself is already in demand-making mode: On Tuesday, he threatened a government shutdown at the end of September if he hasn’t gotten money for his border wall (which Congress was unwilling to give him in April).

But as big an ask as that might be, the White House’s expectations for Congress are actually much, much higher than that — much to Congress’s chagrin.

A new report by McClatchy’s Anita Kumar suggests several key Trump advisers, including Chief of Staff John Kelly, are hoping for a “grand bargain” on immigration.[…]