Acting ICE director Thomas Homan has now admitted that the government’s goal is to make all undocumented immigrants “uncomfortable.” The reality behind Homan’s statement is that even the Trump regime knows it can’t deport all 11 million of the unauthorized; the goal is to keep the 8 million with jobs terrorized so that they can be even more easily exploited. This in turn drives down wages for the immigrants’ citizen fellow workers—what employers mean when they talk about “making American great again.”—TPOI Editor 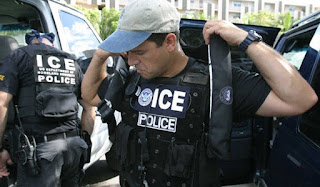 Homan's response came after questions from New York Rep. Nita Lowey, who questioned the ICE director about the detention of 19-year-old Diego Ismael Puma Macancela who was detained hours before his senior prom and days before his high school graduation.

Immigration and Customs Enforcement Director Thomas Homan told a congressional committee Tuesday all undocumented immigrants in the US "should be uncomfortable" and "looking over (their) shoulder" when it comes to who could be deported by the federal agency.

"In the country I grew up in, if you're violating the law you should be uncomfortable," Homan testified Tuesday before the Homeland Security subcommittee of the House Appropriations Committee. "He should be looking over his shoulder if he's in this country in violation of the law and ordered removed. He should be worried that he's going to be arrested."[…]

ICE Director To All Undocumented Immigrants: ‘You Need To Be Worried’
Non-criminals won’t be spared from deportation, Thomas Homan said.

WASHINGTON ― The Trump administration will continue arresting undocumented immigrants who haven’t been convicted of crimes and won’t apologize for it, the acting director of Immigration and Customs Enforcement said Tuesday.

“If you’re in this country illegally and you committed a crime by entering this country, you should be uncomfortable,” Acting Director Thomas Homan told the House Appropriations Committee’s Homeland Security Subcommittee. “You should look over your shoulder, and you need to be worried.”

Following up on Trump’s campaign promise to drive out more undocumented immigrants, ICE arrests rose significantly during the president’s first 100 days in office, compared with the same period the year before. About one-quarter of those arrested ― more than 10,800 people ― were non-criminals, meaning they did not have authorization to be in the U.S., but had not been convicted of a crime. (Being in the U.S. without legal status is a civil offense, although it is a crime to cross the border illegally.)[…]

Read the full article:
http://www.huffingtonpost.com/entry/ice-arrests-undocumented_us_594027c0e4b0e84514eebfbe
Posted by The Politics of Immigration: Questions & Answers at 6:39 AM