Jackson, Mississippi--In early April, an anti-immigrant bill like those that swept through legislatures in Alabama, Georgia and South Carolina was stopped cold in Mississippi. That wasn’t supposed to happen. Tea Party Republicans were confident they’d roll over any opposition. They’d brought Kris Kobach, the Kansas Secretary of State who co-authored Arizona’s SB 1070, into Jackson, to push for the Mississippi bill. The American Legislative Exchange Council, which designs and introduces similar bills into legislatures across the country, had its agents on the scene.

Their timing seemed unbeatable. Last November Republicans took control of the state House of Representatives for the first time since Reconstruction. Mississippi was one of the last Southern states in which Democrats controlled the legislature, and the turnover is a final triumph of Reagan and Nixon’s Southern Strategy. And the Republicans who took power weren’t just any Republicans. Haley Barbour, now ironically considered a “moderate Republican,” had stepped down as governor. Voters replaced him with an anti-immigrant successor, Phil Bryant, whose venom toward the foreign-born rivals Lou Dobbs. [...]

Read the full article:
http://www.thenation.com/article/167465/how-mississippis-blackbrown-strategy-beat-souths-anti-immigrant-wave
Posted by The Politics of Immigration: Questions & Answers at 10:25 AM No comments:

Former Prosecutor in Arizona Is Disbarred

PHOENIX (AP) — An Arizona ethics board disbarred Maricopa County’s former top prosecutor on Tuesday for violating the rules of conduct for lawyers in bringing criminal charges against two county officials and a judge in December 2009 with the purpose of embarrassing them.

All three investigations were dismissed after a judge ruled that Andrew Thomas, the former county attorney, had prosecuted one of the officials for political gain and had a conflict of interest. Other county officials and judges who were at odds with Mr. Thomas and his top ally, Sheriff Joe Arpaio, were also investigated by the two but were not charged. [...]

Read the full article:
http://www.nytimes.com/2012/04/11/us/arizona-ethics-board-disbars-ex-maricopa-county-prosecutor.html
Posted by The Politics of Immigration: Questions & Answers at 10:22 AM No comments:

Fault Lines investigates the business of immigrant detention in the US.

Immigration is a key issue in the US presidential election, with the Republican candidates trying to demonstrate their tough stance on undocumented immigrants.

But under the Obama administration, the detention and deportation of immigrants has reached an all-time high.

Every day, the US government detains more than 33,000 non-citizens at the cost of $5.5mn a day. That is a lot of money for the powerful private prison industry, which spends millions of dollars on lobbying and now operates nearly half of the country's immigration detention centres.

Fault Lines travels to Texas and Florida to investigate the business of immigrant detention in the US and to find out how a handful of companies have managed to shape US immigration laws. [...]

A special event commemorating the 10-year anniversary of the arrest of Farouk Abdel-Muhti, in the room where his supporters regularly met to organize the fight for his freedom. Screening will be followed by an open discussion with the filmmaker and people who were involved in the case, including Center for Constitutional Rights attorney Shayana Kadidal, who has since served as Senior Managing Attorney for the Guantánamo Global Justice Initiative, and MacDonald Scott, legal representative with No One Is Illegal Toronto. 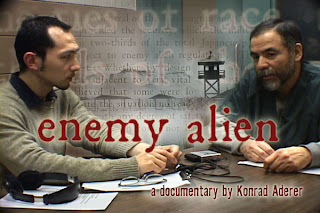 Enemy Alien: a Palestinian activist’s fight for freedom draws a Japanese American filmmaker into confrontation with detention regimes of past and present.

Enemy Alien is a project of Life or Liberty, http://lifeorliberty.org/

“Amazing...now that is what I call a ‘real’ documentary. An exposé of the first order.” - Satsuki Ina, director, Children of the Camps & From a Silk Cocoon

Posted by The Politics of Immigration: Questions & Answers at 10:57 PM No comments:

EL PASO, Texas -- A U.S. Border Patrol agent and his girlfriend are in federal custody charged with buying and smuggling weapons and ammunition across the border to Mexico and into the hands of violent drug traffickers.

The pair was arrested Monday after a yearlong investigation by the Bureau of Alcohol Tobacco and Firearms in El Paso.

Read the full article:
http://www.kvia.com/news/30874369/detail.html
Posted by The Politics of Immigration: Questions & Answers at 11:56 PM No comments:

Tiny Tamaula is the new face of rural Mexico: Villagers are home again as the illegal immigration boom drops to net zero

Tamaula, Mexico--At this time of year in this tiny rural outpost that sits on a mountainside in Guanajuato State, most able-bodied men are gone. They're off plucking and cutting chicken in processing plants in Georgia or pruning the backyards of Seattle.

But this year, Pedro Laguna and his wife, Silvia Arellano, are clearing rocks from their yard to prepare a field for corn. They've returned home to Tamaula, Mexico, with their four young children, after 20 years in the United States working illegally. [...]

Read the full article:
http://www.csmonitor.com/World/Americas/2012/0408/Home-again-in-Mexico-Illegal-immigration-hits-net-zero
Posted by The Politics of Immigration: Questions & Answers at 11:49 PM No comments:

Shocking Video of Death at the Border

These are the words screamed by Anastasio Hernández-Rojas as over a dozen U.S. Border Patrol agents beat and tasered him in May 2010. PBS has just uncovered new video showing how Anastasio laid in the dirt defenseless, begging for his life, as Border Patrol agents continued to beat him. The video elicits haunting reminders of the Rodney King beating as Anastasio cries out "¡Nooo! ¡Nooo! ¡Déjenme! [Leave me alone!] ¡Nooo! ¡Señores!" Anastasio later died at the hospital.

There's been two years of inaction, and now we finally have the evidence we need to break the case open. Watch the video clip and sign a petition telling the Justice Department to investigate his death immediately.

If justice isn't served for Anastasio, even when video clearly shows injustice, Border Patrol agents will continue their pattern of abuse and lethal force. Since Anastasio's death in May 2010, at least 7 other US citizens and non-citizens have died in Border Patrol custody, yet there's been no serious investigation by the Justice Department.

"They [Border Patrol] didn't stop to think that he had a family. That he left behind five children and a wife," said Anastasio's widow, María Puga. Please join María in bearing witness to the killing of Anastasio Hernández-Rojas and tell the Justice Department to investigate his homicide now!

Thanks and ¡adelante!
Arturo, Ana, Roberto and the rest of the Presente.org Team

Why Haiti Wasn’t “Built Back Better”

Earthquakes may be hard to predict, but it should have been easy to foresee the disaster that would result from the sort of quake that hit Haiti in January 2010. Haiti’s failure to recover in the two years since was just as predictable.

The structural problems that turned a bad earthquake into a cataclysm go all the way back to Haiti’s colonial history, but the immediate causes are much more recent. [...]

For earlier earthquake coverage:
http://grassrootssolidarity.blogspot.com/2010/02/singing-and-praying-at-night-in-port-au.html
Posted by The Politics of Immigration: Questions & Answers at 11:02 PM No comments:

The Problem with ObamaCare that Nobody Talks About

While we were demonstrating, I saw a young boy kicking a soda can down the street. I thought to myself, ”That is what they are doing to our children, kicking their futures down the road like an old dirty half crushed soda can."

The national news lit up last week after the Supreme Court heard arguments about ”Obama Care.” The court will decide if Obama’s effort to provide health insurance for most U.S. citizens be requiring all citizens to buy insurance is constitutional.

The news coverage reminded me of the time Familia Latina Unida demonstrated outside on the steps of the Supreme Court. We were asking the Supreme Court to hear our lawsuit which sought to stop the government from deporting the parents of U.S. citizen children. We argued that it violated the constitutional rights of the children. Sadly, the court never decided to hear our case. [...]

Eloy, Arizona.Two people were killed on Sunday night when "an unknown number of subjects in camouflage clothing armed with rifles" ambushed a truck carrying 20 to 30 undocumented immigrants near the southern Arizona town of Eloy," according to the Pima County sheriff's department.

Border Patrol agents and police found one body in the bed of the pickup truck and the other nearby in the desert. The identities of the victims have not been released. [...]

Read the full article:
http://truth-out.org/news/item/8469-arizona-gunmen-wearing-camouflage-kill-two-immigrants-in-ambush
Posted by The Politics of Immigration: Questions & Answers at 4:04 PM No comments:

Wage theft has been a recurring issue for New York City’s Latino community. On March 21, former workers at the restaurant Plaza Garibaldi in Elmhurst, Queens, held a protest, claiming they were cheated out of wages due to them. Below is the translation from Spanish of an El Diario La Prensa article by Gloria Medina on last week’s protest.

Yesterday [March 21], five female ex-workers of the Plaza Garibaldi restaurant in Queens demanded that their former boss pay them $27,000 in wages that they say they earned over months of working there. [...]