This Americas Society white paper provides the first comparative look at the average economic effects of how restrictive versus non-restrictive immigration-related city ordinances affect a city’s business environment. In a context of high unemployment and lackluster business growth, along with rising anxieties regarding immigration in the United States, we believe it essential to provide a better understanding of how policies that seek to restrict immigration and those that support more flexible approaches affect the economies of communities across the country.

Read the full article at:
http://coa.counciloftheamericas.org/article.php?id=3709

Download the report at:
http://www.as-coa.org/files/ASImmigrationWhitePaper.pdf
Posted by The Politics of Immigration: Questions & Answers at 12:59 PM No comments:

Crime Data and Spillover Violence along the Southwest Border

As organized crime-related violence has increased in northern Mexico, so has the heated rhetoric regarding the U.S. side of the border. The title of National Geographic’s program, Border Wars, exemplifies the sentiment, echoed by several politicians, that the border region is lawless and dangerous. For residents of the U.S. border region, thankfully, the reality is anything but that.

In fact, as violent crime surged in parts of Mexico, the U.S. border region became safer. While in Mexico the murder rate climbed 29% between 2005 and 2010, it declined 24% in the U.S. border states. This suggests that despite a smattering of violent incidents perpetrated by members of Mexican criminal groups in the United States, widespread “spillover violence” has not occurred.[…]

Read the full article:
http://mexicoinstitute.files.wordpress.com/2011/10/border-violence-brief-10-14-2011.pdf
Posted by The Politics of Immigration: Questions & Answers at 12:51 PM No comments:

I would like to dedicate this column to our people in the state of Alabama. I would like them to know that we are watching and supporting them in our homes and communities all over the United States, Mexico and Guatemala. […]

REALLY and TRULY LAST CHANCE GIVEAWAY!! Everything must go!!

More information at:
http://weeklynewsupdate.blogspot.com/2011/10/still-more-free-books-from-new-york.html
Posted by The Politics of Immigration: Questions & Answers at 11:43 AM No comments: 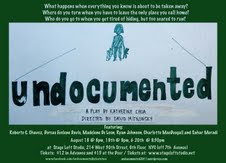 What happens when everything you know is about to be taken away? What can you do when you have to leave the only place you call home? Where do you go when you get tired of hiding, but too scared to run? What do you do when you’re not sure if you’re a victim or a criminal?

These are just some of the barriers that young undocumented immigrants must confront. In the multimedia play Undocumented by Katherine Chua, she highlights the inner turmoil of a girl called Frida, who has been found out by the authorities as being in the country illegally. Although she has been living in the U.S. since the age of 8 and is now 25, she will be taken from all she's ever known and deported "home" to her native country. The only light is the possibility of having the DREAM Act bill get passed by legislation. But before Frida can find solace and trust in this bill being past she must find solace, trust and forgiveness in those around her and most importantly herself.

"plant a seed of knowledge . . . incite the growth of a revolution." 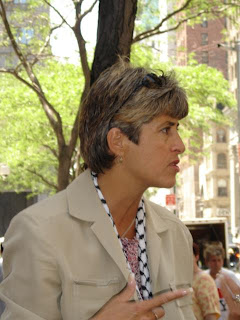 Educator and Palestine activist Sharin Chiorazzo died on September 30 after a long struggle with cancer. She was 51; she is survived by her daughter Nadia, her sister Cathy and her parents, Joan and Joseph.

Sharin was an adjunct professor in Middle Eastern studies at several New Jersey colleges and also taught elementary Arabic. She had degrees from the New School for Social Research and New York University; her PhD dissertation, A theoretical discussion of the nation-state in Western discourse and its application to non Western peoples, is available from ProQuest. Sharin co-edited Palestine Rising, Dawud A. Assad’s memoir of surviving the 1948 massacre at the Palestinian village of Deir Yasin.

Starting in 2002 Sharin was a member of the committee that worked for the release of her friend Farouk Abdel-Muhti, a New York-based Palestinian activist then being held in immigration detention. After a federal judge ordered Farouk released in April 2004, he and Sharin made plans to marry. Sharin was with Farouk the night of July 21, just three months after his release, when he died suddenly of a heart attack while in Philadelphia to speak on the struggles for Palestinian and immigrant rights.

Several friends from the Farouk campaign visited Sharin on September 24 at her home in southern New Jersey, where she was surrounded by family and friends. Lucid and still committed to the Palestinian cause, she entrusted us with papers, letters, and photographs from Farouk and from her years of Middle Eastern activism. 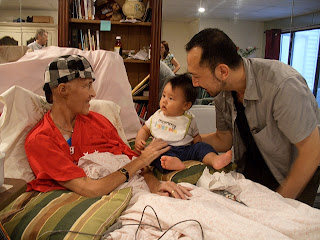 Sharin at home last week with Konrad Aderer, the director of “Enemy Alien,” and his son, Kiyoshi. The photo at the top shows Sharin at the July 22, 2005 vigil in Farouk’s memory (from NY Indymedia).
Posted by The Politics of Immigration: Questions & Answers at 9:42 AM No comments: